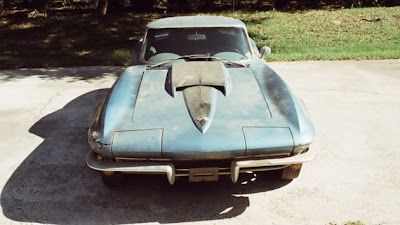 This dusty, rough-looking example of a 1967 Chevrolet Corvette Sting Ray would draw a sizable amount of interest from any Corvette collector. Its billing as the Corvette given to astronaut Neil Armstrong then kept in a barn for a few decades until now, makes it a fascinating piece of history to float into an online auction.

The eBay seller in Florida claims that despite much wear and a thick coat of dust, this ride hasn’t been driven since 1981. Here’s the explanation for its history, including the reminder that being a NASA astronaut once meant getting a free car for a year.

Guchi Unlimited Is Plus One Today, Officially Launches His Brand.

MC Pashun And Gentle Set For Another Exclusive Laugh Party

Signs, NIS Risks Leap-Diving Into a More Brutal Past

This site uses Akismet to reduce spam. Learn how your comment data is processed.

Chinedu Francis - September 10, 2020
Finally, the awaited 'Realms' EP by Wande Coal has dropped. The EP features 6 videos which were all performed by WC...
Read more

Fradormedia™ is a top Nigerian brand that promotes products and services relating to activities in the Arts and Entertainment sector in Nigeria and Africa. Founded in 2012 by Chinedu Francis.
Contact us: fradormedia@gmail.com
© FradorMedia™ 2012-2021 | All Rights Reserved.
At Fradormedia™, we use cookies on our website www.fradormedia.com to give you the most relevant experience by remembering your preferences and repeat visits. By clicking “Accept”, you consent to the use of ALL the cookies.
Do not sell my personal information.
Cookie settingsACCEPT
Manage consent

This website uses cookies to improve your experience while you navigate through the website. Out of these, the cookies that are categorized as necessary are stored on your browser as they are essential for the working of basic functionalities of the website. We also use third-party cookies that help us analyze and understand how you use this website. These cookies will be stored in your browser only with your consent. You also have the option to opt-out of these cookies. But opting out of some of these cookies may affect your browsing experience.
Necessary Always Enabled
Necessary cookies are absolutely essential for the website to function properly. This category only includes cookies that ensures basic functionalities and security features of the website. These cookies do not store any personal information.
Non-necessary
Any cookies that may not be particularly necessary for the website to function and is used specifically to collect user personal data via analytics, ads, other embedded contents are termed as non-necessary cookies. It is mandatory to procure user consent prior to running these cookies on your website.
SAVE & ACCEPT